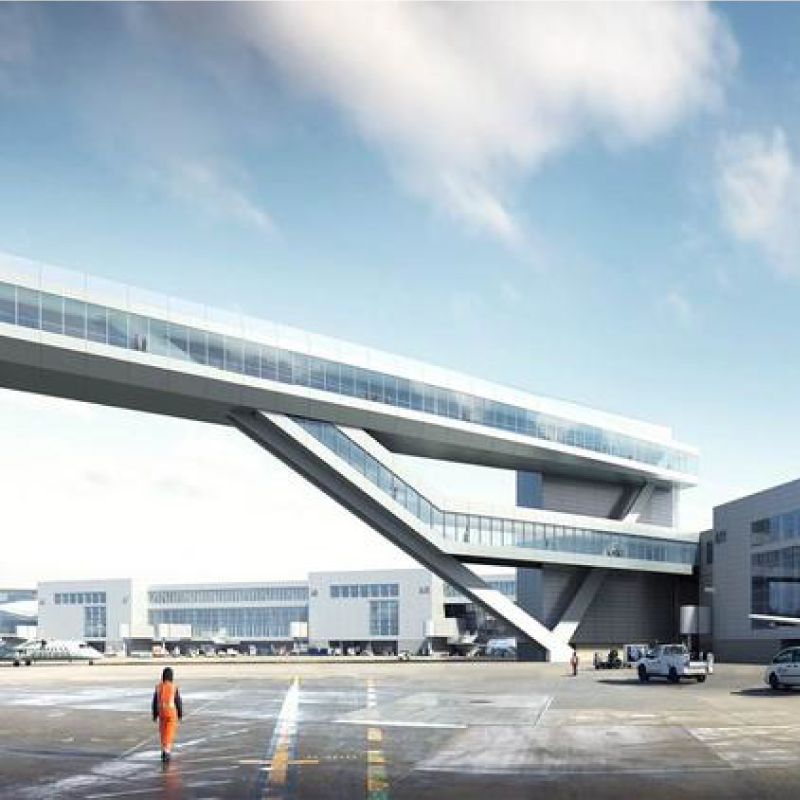 The SeaTac Pedestrian Walkway is the world’s largest structure over an active taxi-lane, and it took eight years to plan, design, and construct this bridge. This iconic aerial walkway, has a length of 780-feet and height of 85-feet, long enough for two Boeing 747’s to fit under this bridge, wing-tip to wing-tip. The pedestrian bridge connects the satellite terminal to the SeaTac airports new international main terminal (IAF), which was built by Supreme a year prior to the sky-bridge.

The south satellite and concourse A sides of this pedestrian walkway, are made up of large V-pier structures and monolithic cannon base structure. These elements are made up of heavy steel plates (up to 4-inches in thickness), with most of the points being CJP’s on facture critical material. Each V-pier weighs 260,000 pounds or 130 tons, which is more than two blues whales.

Once the V-piers were fully erected and welded out, the taxiway was fully closed and the center-section was moved in place. This center-section was originally shipped from Supreme’s Portland shop is up to 80 foot-sections. Modularly connected off-site into the center-section “super structure” stretching to a total length equal to a football field and weight of 3 million pounds. From the Pre-fabrication area, this center span was transported per a self-propelled modular transport device 3 miles down the airports center runaway to its final destination.

To allow for prior fit-up, the V-pier structures were design to roll-back and raise (like a draw bridge), with large strand jacks mounted on the fare cantilever ends of these structures. Once the center span was positioned in place and risen to proper elevations, the V-piers structures rolled back to lock the center section in place. The installation and weld-out of the center section was successfully done in a 7-day closure of the tax-way.

The walkway would be only the third such structure of its kind at any airport, and the world’s longest. To put the size of this bridge in perspective, picture a bridge 150ft longer than Seattle’s Space Needle!